Having just spent my “Black Friday” turning my town into a veritable Winter Wonderland, I am most definitely in the Christmas spirit. I’ve got my Christmas music on repeat, 24/7. It’s still November and I’ve already begun sending out Christmas cards because I AM SO EXCITED!

This is my favorite of all of the holiday seasons. I begin December with my birthday (which is all about me!) and then I get to spend the rest of the month singing (off key) to all of my favorite holiday songs and show-tunes (Oh yes, there will be show-tunes)!

There will be colorful lights, bows, Santas, reindeer, sleighs, mistletoe, CHRISTMAS TREES, Christmas movies and oh so much happiness!

How can anyone NOT be excited during the Christmas season?  Everything is just so…well…MERRY.  Heck, just walking down the Christmas aisle at Walgreens made me tear up a bit.  (I’m a really emotional person.  I just hide it well – well, when I’m not blogging).

People are nicer, kinder and much more giving over the holidays.  This is the season that breeds good deeds.  What’s not to love?

I am sure that I will be blogging about Christmas much more throughout the month of December but I needed to get out a little bit of my excitement for now.  My gift to you, for now, is ABC Family’s holiday lineup!  Check it out below and make sure you catch “Arthur Christmas,” it’s one of my favorites. 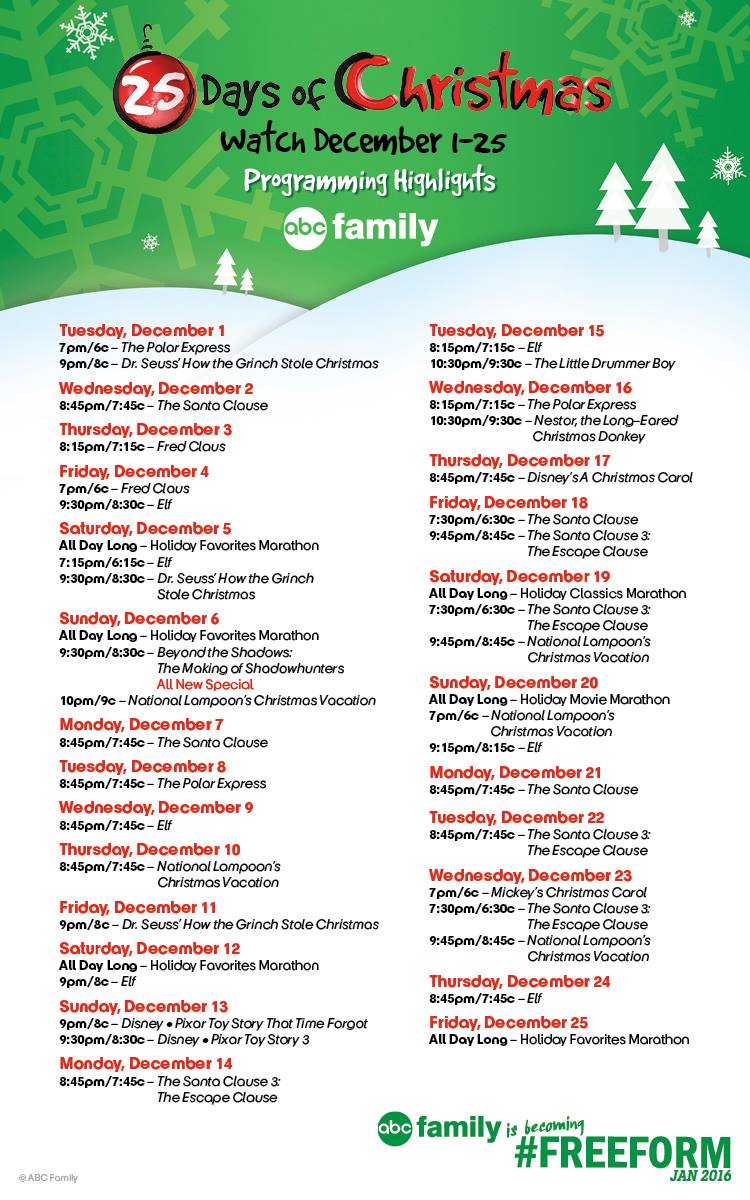 I must say that I really enjoyed the trailers for Arthur Christmas but I have developed a completely rational fear of movie trailers lately.  My reason for this fear, is that trailers are most often an illusion.  They can make a good movie look great and an awful movie look fantastic.  More often than not these trailers fool me into believing that I am emptying my wallet for a masterpiece rather than the crap Hollywood prefers to mass-produce.  Today, after a marathon of “Lifetime” Christmas movies, I decided to take a risk; I bought a ticket to see ‘Arthur Christmas.’  Gladly, I can assure you that it was well-worth it and a brilliant end to my Christmas-movie marathon!

I sat in the theater and with the opening credits alone, was immediately transformed into a child again.  With my feet up on my seat, my arms wrapped around my knees pulling them close to my chest and a smile from ear to ear, I could not take my eyes off the screen.  “Arthur Christmas” is truly a unique holiday movie.

The film is a fantastic commentary on both the family and political dynamics disguised by Christmas cheer.  It was relatable and heartwarming all at once.  I don’t claim to be a great movie critic, mostly because I feel guilty giving away too many key points of a movie, so I won’t give away a thing.  I believe in offering you my opinion only.  The movie was very well done; a great story, great actors, great direction, and great animation.   You will develop a new appreciation for the work that they put in over at the North Pole.  Afterall, magic can only do so much.   If you need a bit of Christmas spirit, a couple of hours with Arthur Christmas should do the trick.

**In layman’s terms-  ARTHUR CHRISTMAS WAS FREAKIN’ AWESOME!  I LOVED IT!  I AM GOING TO BUY IT AS SOON AS IT’S ON DVD!

Two days before Halloween we had our first snow fall of the season.  The wrong season, but ya know what?  I like it.  I have taken it as my very own personal sign that for this year, if only this one year, it is ok to begin celebrating Christmas two months in advance.  I guess that sounds like a long time once you put a number to it but again I say, I like it.  As I sit here listening to my Christmas music and drinking my Vanilla Chai Tea with snow on the ground outside my window, I can’t help but feel that this is right.  This year, the holiday season began in October.

As a child, we all know that Christmas elicits a feeling like no other.  The holiday season brings joy unmatched by the preceding year.  Smiles abound; eggnog and apple cider stock the fridge and cookies and cakes litter the cabinets while tinsel, garland, and sparkling lights make the world a little brighter this time of year.  Christmas is the only holiday that can bring a tear to my eye; tears filled with happiness that maybe, just maybe, this year…I can feel like a kid again.

Over the years, that feeling, that special feeling all its own has slowly vanished.  I’ve tried so hard to hold onto and yet it slipped through my fingers.  Perhaps that is to be expected as years go by.  With age comes a never-ending sense of emptiness?  That can’t be right.  So why is it that my Christmas spirit has disappeared?  The past few years have not been the hardest of times but neither have they been the easiest.  Stress and lack of time won out over Christmas joy.  What with final exams, part-time jobs, and full-time jobs, Christmas slips by in just one day filled with food and presents.  No fair!  I don’t want one day of Christmas, I want 25!  (Or in this case, 59!)  As a child, it is the anticipation of Santa’s arrival and a tree surrounded by presents that leaves us feeling so excited.  As an adult, it is the anticipation of credit card bills after yet another round of Christmas shopping that leaves us much more stressed and much less excited.  With adulthood comes stress, yada yada yada.  This year, I will do my best not to stress  OR if I do stress near the days leading up to Christmas, at least I will have celebrated the season for one month in advance.  Clever thinking, I know.  This girl is ahead of the game!

No matter what, I won’t let all those nay-sayers get me down.  To those people who say it’s “pathetic”, “disgusting”, or “annoying” to listen to Christmas tunes before Thanksgiving, I say get over yourselves.  Then I will blast “You’re a Mean One, Mr. Grinch” in the hopes that they can take a hint.  No one is taking Christmas from me this year!  I’m even going to write a Christmas List, for old times’ sake.  Take that, November! 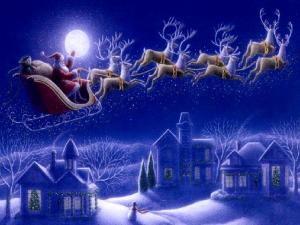 Hi Santa!!  I think I’ve been a pretty good girl this year (but I’ll let you be the judge).  I wanted to send you a nice little letter with a few things that I would like for Christmas.  Don’t feel obligated or anything.  I mean, I know you’ve got a lot going on, delivering presents all over the world in one night and all.  And I hear the reindeer have been a little snippy lately so…I hope the stress hasn’t got you down!  If you have the time, I would like:

*A sense of security.  (Whether it be a full-time salaried position, or just some ultimate calm that gives me peace-of-mind. It would be greatly appreciated).

*I would like to stop feeling exhausted all day long and rise out of this slump sooner than later.

*I would like for people in this world to be a little more accepting.  Convince them to take the time to walk in someone else’s shoes before they judge them?  (Use your smooth-talking skills, Santa.  You got this!)

*Aaaaand I also want…tickets to a Michael Buble Concert, Bunny Slippers, New Earrings, tickets to a Broadway show, a newly painted bedroom, a new TV, money, and oh I don’t know..why don’t we throw in a teacup pig too.  ( I really want the teacup pig).

I know it’s a lot to ask for, Santa but I’ve been such a good little girl (kinda, sorta, maybe)!!!  These things are in order of importance so it’s cool if you just stick to the first one. 🙂